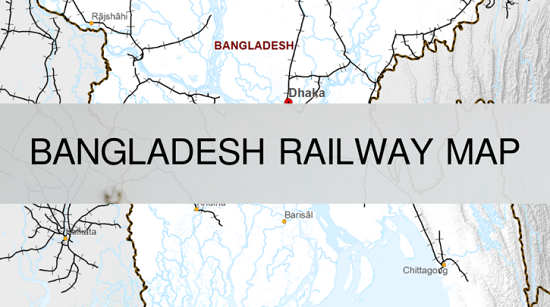 Bangladesh Railway Route Map is a schematic diagram of train routes. It shows the connection of rail lines and railway routes and stations of Bangladesh. It usually helps the travelers to know the Train Road Map of Bangladesh. Nowadays, Railway transport is the favorite in the comparison of other transports. Therefore, with the help of the map, you can get an accurate idea about the railway routes and rail lines. Moreover, the travelers can plan out for their journey according to the map. Besides, they can also get to know the previous and next stoppage of their boarding trains.

So, in this article, you will be provided the pictures and the overall description of Bangladesh Railway Map.

The Railway Route Map shows the Railway routes and tracks. Moreover, it shows the location of Railway stations. Probably, the map presents the complete track list of stations.

The latest official map of Bangladesh Train Route was launched in 2013. But, this map does not contain the names of every station. For Instance, the map shows the important railway junctions, meter gauge, narrow gauge and under construction rail lines.

Here, we are showing you the Image of Bangladesh Railway Route Map. In the map, you can see the Railway network of Bangladesh.

In the Train Road Map, the links between trains are displayed with colorful dot lines. So, it is quite understandable for the passengers.

Fairly, Bangladesh Railway Route Map is a great helper for the passengers of trains. The map of Bangladesh Train Routes, most importantly, shows the network of stations with different zones across the country. So, train travelers can easily make their journey plan. Moreover, you can also know the movement of trains according to the map. Thus, you will match up with the train schedule and will not be late at stations.