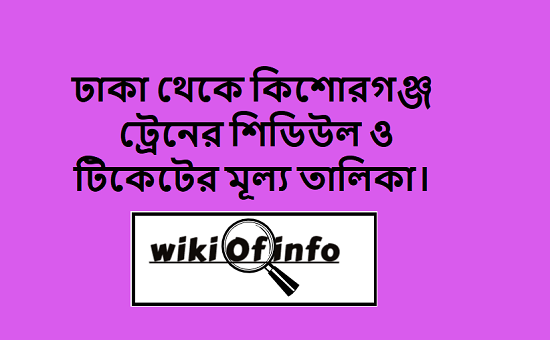 Dhaka is the capital of Bangladesh and on the other hand, Kishoreganj is a district in Dhaka division which is famous for its historical identity. So people come to the district mainly to visit historical places, also for business, treatment, study purposes and so on.

The names of the trains of Dhaka to Kishoreganj are :

However, there are three Intercity trains and they travel both from Dhaka to Kishoreganj and Kishoreganj to Dhaka. Besides these three intercity trains, there is only one Mail/Express train named Isha Khan Express.

The trains that travel from Dhaka to Kishoreganj, also travel back towards Dhaka. So, there are three Intercity trains and a Mail/Express train travel from Kishoreganj to Dhaka.

Kishoreganj to Dhaka Intercity trains schedule is given below :

Kishoreganj to Dhaka Mail/Express train schedule is given below :

Train ticket’s price depends on the distance of destination. The distance between Dhaka and Kishoreganj is nearly 180 kilometers and it only takes 2-4 hours for travelling from Dhaka to Kishoreganj.

For travelling, most importantly, you should know the ticket booking procedure. On previous days, travelers had to go to the stations and stand on the lines to reach the ticket booth. It used to kill the valuable times and energy of the travelers due to this. But nowadays, you do not have to go through this long procedure because, now you can easily book the tickets of your demanding seats, sitting in your home or any other corner of the country via online. Bangladesh Railway Services provides E-ticketing website, by which you can easily inquire about the train schedule and ticket expenses and book the comfortable seat compartment of your choice.