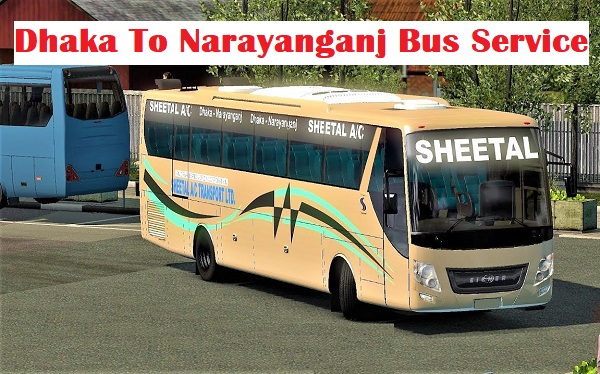 Narayanganj is an industrial city of Bangladesh. All industrial work is done here. So many people from Dhaka often have to come for work or any office work, that’s way need to know Dhaka To Narayanganj Bus Service.

Many offices are inside Dhaka but since the factory is here, they often come to see how the work is going. As a result, many individuals are interested in learning more about the Dhaka to Narayanganj Bus service.

Which buses go? How is the price? When does the bus leave Dhaka? Where do the buses stop to pick up passengers? Knowing all this will save less time. In this content some details are given so that the passengers can benefit from Narayanganj Traveling.

Himachal and Sheetal are more popular among the bus services from Dhaka to Narayanganj.The Himachal bus runs more on the Dhaka-Narayanganj route than the Sheetal bus.

BRTC launches both AC and non-AC buses. The buses are made in India and brought into the country. They bring 100 AC buses, 100 non-AC buses and 100 AC buses for Inter Dhaka City.

They also bring 300 double decker buses. In between, some BRTC buses were launched on this route from Dhaka to Narayanganj.

No more than 3 buses from Dhaka to Narayanganj. Ticket price and counter location of those buses are given:

Let’s check the Dhaka Narayanganj Bus Schedule from below.

Himachal Express is a popular transport service provider in Dhaka, Bangladesh. It is a well-known transportation operation for general and high class services.

This express is widely popular and the first choice of visitors. It provides a safe and enjoyable journey for the passengers while maintaining the right time and schedule.

Among the bus services available from Dhaka to Narayanganj, Himachal Bus is the busiest on this route. The Himachal bus counter is at Mirpur-12. From there the bus goes to Narayanganj every day.

The bus that leaves Nadda at 8:26 pm goes directly to Chashara,  Narayanganj and picks up the passengers. The fare per person there is 46 Taka.

After a short walk from Dhaka to Coca Cola, you can get a bus from there. It leaves Dhaka at 8:31 pm. The fare per person is 46 Taka.

Fixed fare for Himachal bus is 50 Taka, only if you can get a ticket from Mirpur counter.

The main head office of Sheetal Bus is Narayanganj. It runs mostly on the Narayanganj to Dhaka route. The bus ride from Dhaka to Narayanganj takes approximately 2 hours.

Although Narayanganj is not far from Dhaka, it is more convenient to travel by bus. Travel can be done by bus in less time. By collecting the tickets from the counters mentioned above and knowing the correct time, you will be able to reach Narayanganj comfortably by taking your exact bus. Details of Dhaka to Narayanganj bus service are given above. It is hoped that passengers will get their required info from here.