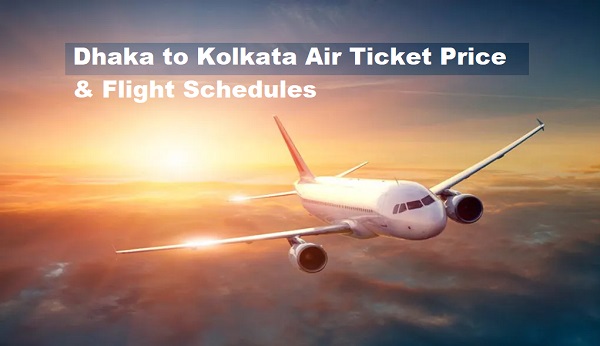 One of the largest cities and most exciting tourist spots in India is Kolkata. Every year a considerable number of Bangladeshi tourists visit Kolkata, India. There are several modes of transportation for travelling to India, but one of the popular transportation mediums is the plane. So, in this article, we will discuss the Dhaka to Kolkata air ticket price for those who want to visit Kolkata from Dhaka by air.

One of the major cities in the West Bangle region is Kolkata, and you can enjoy every bit of this city. Within a very short time, you can complete a trip to India through air travel. However, in this article, we will discuss all the details of travel times, air schedules, and air fares of different airlines from Dhaka to Kolkata. So let’s dive into the discussion:

If you decide to travel to India from Dhaka by plane, the first thing you require to do is to book a flight. But before booking a flight, you should know which airlines operate flights in these two destinations, their flight schedule, and air ticket price.

Knowing all these information will enable you to book a convenient flight within your budget. So in this article, we have arranged all those details. Now go through the following sections.

Your journey will start from the airport. Thus you need to know the exact location of the respective destination’s airport so that you can reach them in time and catch your flight. So the airport details of Dhaka and Kolkata are:

Several airlines operate flights from Dhaka to Kolkata and vice versa. Thus the flight time of each airline is also different. In the following section, we will discuss the flight schedules of different airlines between these two destinations.

Almost every day, Biman Bangladesh airline operates flights from Dhaka to Kolkata. Biman 95 has a flight schedule all day a week. Whereas Biman 91 also has flights all day except Tuesday and Friday. And Biman 191 operates its flight only on Tuesday and Friday. Look at the following table to know these flights’ departure and arrival times.

Now learn the details of departure and arrival times of these flights by going through the table below:

US Bangla airline operates only one flight from Dhaka to Kolkata. However, flight no. US-Bangla Airlines 201 operates only Saturdays and Thursdays a week. The departure and arrival time of it is presented below:

On the same days of the week, Saturday and Thursday, US Bangla airline’s flight no. US-Bangla airlines 202 operates. Its flight time is presented below:

Only one flight of Air India departs from Dhaka to Kolkata that too only on Monday and Friday. The flight schedule is presented below:

Air India has one flight from Kolkata to Dhaka on Monday and Friday a week. The departure and arrival times of this flight are:

Indigo airline operates flight no. Indigo 8251 from Dhaka to Kolkata 4 days in a week including the Saturday, Sunday, Tuesday and Thursday. The flight time is present below:

Again if you want to travel from Kolkata to Dhaka through the Indigo airline you can do that too as this airline operate flight in this route also. The flight schedule details of this airline is:

SpiceJet airline operate Dhaka-Kolkata flight in the 5 days in a week including Monday, Tuesday, Wednesday, Thursday and Friday. Now go through the following table to know the departure and arrival time of SpiceJet 719 flight.

On the same 5 days of the week, Indigo Airlines operate flight from Kolkata to Dhaka airport. The departure and arrival time of the flight is presented in the following table:

Note: Without any prior notice due to technical reasons or depending on the weather condition, the above airline’s flight schedule between Dhaka – Kolkata can change. Communicate with a travel agent and carefully confirm the flight.

So, the above discussion already made it clear that there is no lack of available flights from Dhaka-Kolkata and vice versa. Several airlines operate the flight on these routes. But the pricing or air ticket fare of these airlines are not same. Rather different airlines charge different prices. And one important thing is that the airfare changes every time or day depending on different factors.

Thus in the following section, we will present the air ticket price from Dhaka-Kolkata based on the most recent time. We will provide you the updated information and all the details will definitely be convenient for you. So now, let’s dive into the next section.

In the Super Saver class, Biman Bangladesh charges price only BDT 8400, and it is quite affordable also. Now go through the table below to know the Dhaka to Kolkata air ticket price in taka.

The starting air ticket price of US Bangla on Dhaka-Kolkata route is less than the Biman Bangladesh airline. Depending on several class or categories, this airline offers different ranges of price to travelers.

For the Saver, Flex, Flex Plus and Business Saver class US Bangla charge different price. And there is much difference between all these class’s airfares. Now take a look below at the table to know the Dhaka to Kolkata air ticket price today:

Based on the Economy, Business and First class category Air India charges three different types of airfare and the exact price is presented in the following table.

The starting airfare in Indigo Airlines from Dhaka to Kolkata in the Saver category is not much and affordable. But for booking a flight on the Flex Plus category, you have to pay more. The price details of Dhaka-Kolkata ticket in Indigo airlines are:

SpiceJet airline also fix the price of their air ticket based on three categories and those are the Spice Saver, Spice Flex and Spice Max. The following table incorporates the air fare in these three categories.

The airfare of Regent Airways from Dhaka to Kolkata based on different categories are presented in the following table:

Note: Almost all the time, the airline ticket price keep changing. And the Dhaka-Kolkata air ticket price is subject to the same change.

India, West Bengal’s capital city is Kolkata, and this city is full of natural and cultural heritage and beautiful sightseeing places. On the Hooghly River bank, this city is located. Kolkata is the living witness of various events, history, architectural development and tradition.

However, this city is one of the popular travelling destinations for Bangladeshi visitors. Often Bangladeshi travelers visit this city for sightseeing, medical treatment or shopping at a very low cost. In an around of Kolkata you will find different famous and historical places to visit. If you have enough time in hand, you can visit the following travelling destinations in Kolkata.

Travelers, before booking the Dhaka-Kolkata flight, often search to know different things like the flight schedules, ticket prices, and other important questions. In this FAQ section, we will incorporate all those questions so that you can get your answer at a glance, and you don’t need to search more.

How long does a flight from Dhaka to Kolkata take?

The average flight time from Dhaka to Kolkata is 0h 50m and total flying distance is 149 miles.

Do I need a passport to fly between Dhaka to Kolkata?

Yes! For flying between Dhaka to Kolkata, you need a passport, visa and legal documents. Before boarding the plane in Dhaka, you have to show a valid passport to the airport authority.

Do airlines from Dhaka to Kolkata offer sleeping areas?

The sleeping area is available on a few airlines that operate their flights from Dhaka to Kolkata. Based on pay per use, this service is available.

What are the most booked classes for a Dhaka to Kolkata Flight?

Business or economy class is the most booked class for Dhaka to Kolkata flight.

So now after going through the above article hopefully you know the details of Dhaka to Kolkata air ticket price. As we already discussed, there is no shortage of flights from Dhaka to Kolkata and Kolkata to Dhaka. Moreover, there are enough options available for you to choose from. Comparing the flight schedule, departure and arrival time and flight price you can pick the best flight for you.

While booking a flight don’t forget to pick the closet airport to you that will save your time and money both to reach the destination. At a very minimum airfare, you can enjoy your Dhaka to Kolkata flight. But you have to do a little research and choose the flight wisely. For booking your desired flight for the Dhaka-Kolkata trip, book here.