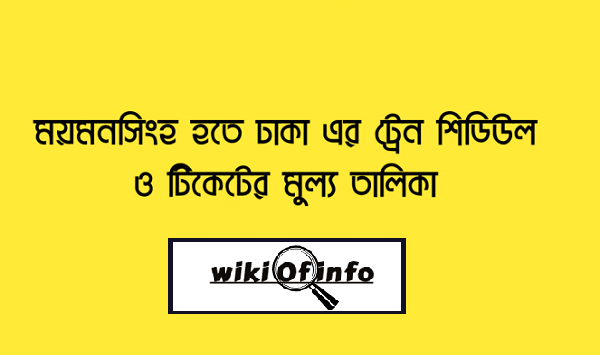 Mymensingh is approximately 109.7 KM away from Dhaka. If you traveling by train it can take up to 2-4 hours. Every day lots of traveler traveling Mymensingh to Dhaka or Dhaka to Mymensingh by train.

If you are a traveler then, you should need to know the Mymensingh to Dhaka train schedule. The train journey is always very enjoyable and relatable than another journey on the route.

So, if you want to make your journey enjoyable and memorable here, we will provide you all the correct information about Mymensingh to Dhaka train schedule according to fare. Stay connected, lots more know.

According to the Bangladesh Railway authority, there is no selective train which only travels for Mymensingh. There have many intercity trains or mail trains that cross over Mymensingh district and take the break to get a passenger. Two different categories of train run on Dhaka to Mymensingh or Mymensingh to Dhaka. These are:

All the intercity or Mail train start their journey from komolapur railway station and after half an hour these trains come to Dhaka Biman Bandar Station. Take the passengers from these stations with their preference. Now, here we have Mymensingh to Dhaka intercity train schedule

You can also buy or book your ticker online just like other route tickets. According to the different types of seat category, there are different price ticket you can buy.

There will be a 15% vat charge that will be added with the price. Some times there will change the schedule base on the weather. Sometimes ticket prices also high occasionally which is not permitted from the government.

If you want to book train ticket online? you can try here, we have provided direct link for buy trian ticket online, Just follow below button.

Basically, aghnibina express runs on Dhaka to Tarakandi route and on the way, halt on Mymensingh. If you want to travel on Aghnibina express, you should follow to Dhaka to tarakandi train schedule.

This train code no is 736 and they have no off day, runs seven days in a week. Aghnibina express departs from Mymensingh at 19.15 to Dhaka and reaches Dhaka at 22.35.

Brahmaputra express train code 743 and 744. This train runs on Dhaka Dewangong Bazar route and there is a stoppage in Mymensingh. You can make your journey any day in week because they have no off day. departs from Mymensingh at 9.00 to Dhaka and reaches Dhaka at 12.40 .

Just like others jamuna has no off day runs for seven days in a week. It’s also run on tarakandi route just like agnibina. It starts journey from Mymensingh at 4.20 AM and reaches Dhaka at 7.45 AM. This is Mymensingh to Dhaka train time.

Departs from Mymensingh at 4.35 AM and reaches Dhaka at 7.40 AM. It’s run very early in the morning, that’s why not many people make a journey from Mymensingh to Dhaka trough this train. Monday is the off day.

This way, if you know the exact information about Mymensingh to Dhaka train schedule, then the journey will be enjoyable.

With the serial no 40 This train runs starts it journey at 12.01 AM from Mymensingh and reached at 23:00 similarly departs Dhaka at 11.30 AM reaches Mymensingh at 9.45 PM. Isha khan express runs from Dhaka to Mymensingh Route.

Mahua express runs from Dhaka to Mohongonj Route. starts its journey from Mymensingh to Dhaka at 5.22 PM with serial no 44 and reaches at 21:25 similarly leaves Dhaka at 8.10 AM.

Destination is expressed by name because it starts a journey from Dewanganj Bazar. Those people who is want to go early dewangonj commuter is the best choice. Runs from dewangonj at 3.33 PM and 5.40 AM from Dhaka. Approximately it takes six hours to reach the destination.

It is one of the fastest mail train services which run on the Dhaka Mymensingh route. Balaka commuters’ serial number is 50 and it takes almost four hours to reach the destination. It departs from Mymensingh at 1.45 pm and Dhaka at 10.30 AM.

With the serial, no 52 starts the journey to Mymensingh at 3.40 PM and It leaves at 7.30 AM. They no off day so you can travel any day you want.

Mymensingh to Dhaka or Dhaka to Mymensingh journey is not such a long journey but everyone needs a hassle-free journey. If the journey is not comfortable and enjoyable it will feel very dizzy or annoying.

So, it’s very important to the details about Mymensingh to Dhaka train schedule and also about the seat classification or ticket price. Make your journey enjoyable take the facilities and service of the Bangladesh railway provide. Every journey should be memorable, it may far or near doesn’t matter.