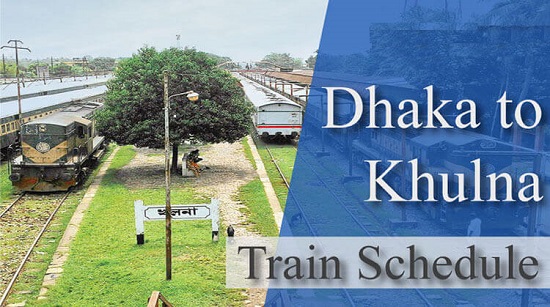 There are many stations on the Dhaka to Khulna train. When you want to journey by train, then you have to know about this train schedule, ticket price, and station list.

So, below we include the Dhaka to Khulna Train station list for you.

Everyone wants a cheap ticket price and a comfortable journey. So, The train is the best option for them.Because, if you compare with the bus service, The train ticket price is cheaper. Also, trains are the best choice for the middle classes and lower-middle classes.So, we will give you the ticket price of Dhaka to Khulna, which we take from Bangladesh Railway.

Dhaka to Khulna & Khulna to Dhaka, both of these trains, are running in a two-way format on this route. You can get your train ticket at least five days ago from the date of your journey.

Sundarban Express train is an intercity train. It’s run between Dhaka, which is the capital city of Bangladesh and Khulna.This train started the journey from 2003, 17 August. Now, we will give the latest ticket price of Dhaka to Khulna Sundarban Express train.We collected the train ticket price of the Bangladesh railway. So, if you want, you can believe all this information without any hesitation.

This Chitra Express is also a Bangladesh intercity train that runs between Dhaka to Khulna. Chitra is named after the Narail river of Chitra.

Again we are discussing the Dhaka to Khulna train schedule together. If you need more information, just visit the Bangladesh Railway official site.

Schedule Of Khulna To Dhaka Train:

Here is the Khulna To Dhaka Train Schedule. Sundarban Express Departure Khulna 8:40 AM and Dhaka Arrival 6:20 PM. This train journey took more than 10 hours. Monday is the Off day for Sundarban Express.

If you want, you can share it on your social media timeline. Because when you need this Dhaka to Khulna Train Schedule, then you can find it easily. Here, we added all information about Dhaka to Khulna Train Schedule and ticket pricing. Do you have any questions? If yes, then just comment on us in the comment box? When we see your comment, then definitely, we reply to you.