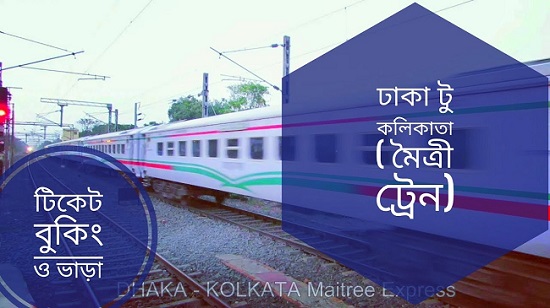 The Maitree Express Train is usually pronounced as “Moitree”. It refers to the connection between Dhaka, the capital of Bangladesh and Kolkata, the Indian state of West Bengal. Besides, it was first launched in April 2018. Apparently, The Maitree Express is an International Express train with modern facilities. Besides, this train provides fully Air Conditioned first class coaches. So, undoubtedly, it ensures the complete comfort for the passengers. Moreover, It has more than 450 seats for the passengers.

In two stoppages of both from Dhaka to Kolkata and from Kolkata to Dhaka Railway route, the Custom and Immigration process will be done. For instance, the Immigration will be done in Bangladesh border from 13:50 (BST) to 14:50 (BST). On the other hand, in India border, it will be held from 14:30 (IST) to 16:00 (IST).

Probably, the ticket’s fair of Maitree Express Train is a bit costly. Because, this train travels one country to another. So, it is usually reasonable for travelling from Dhaka to Kolkata or Kolkata to Dhaka.

Here are the details of Maitree Express Train Ticket Price in Bangladesh.

Here are the details of Maitree Express Train Ticket Price in India including VAT and Travel Tax.

If you are going to run India to Bangladesh, you need to know Dhaka To Kolkata Maitree Express Train Schedule and Train Time Table for reach destination. Now we will show Time Table which has to maintain from 1st March 2017. You can check in below the Maitree Express Dhaka to Kolkata New Time Table.

Unfortunately, you cannot get Maitree Express Train Ticket through online because of security purposes. For instance, Maitree Express travels across Bangladesh to India. That means, the validity of Passports and Visas of the passengers needed to be checked properly. So, checking through online is not secure at all. Therefore, Indian Railway Catering & Tourism Corporation (IRCTC) does not provide the Maitree Express Train tickets via online. So, you need to go to the ticket counters along with your valid passport and visa for buying tickets.

The passenger’s capacity of Maitree Express from both Dhaka to Kolkata and Kolkata to Dhaka is 456. There are total 10 coaches in the Maitree Express Train. Moreover, there are AC Cabins and AC Chair compartments in every coach. Besides, in each cabin, up to four passengers can sit. Furthermore, there is a pantry car attached with every coach. According to IRCTC, passengers can use the catering services between two Railway stoppages Kolkata and Gede. On the other hand, Bangladesh Railway allows the travelers to use catering services between Darsana Station and Dhaka Cantonment Station.

The limit of carrying goods on Maitree Express is up to 30 kg with free of charge. In clear words, an adult can carry 30 kg goods without any charges. On the other hand, a child can carry 20 kg goods with free of charge. If you carry more than 30 kg then, you have to pay. For instance, the charge is 2 USD per kg for carrying 31 kg to 50 kg goods. Besides, the charge of carrying goods more than 50 kg, is 10 USD per kg. Moreover, a passenger is allowed to carry only two luggages.